It's been a while since I updated this Blog.  In fact the last post was my report of the amazing OlymPicnic UltraMarathon all the way back in June.  The lack of updating has been not for a lack of running however a lack of racing.  Apart from a couple of parkruns (including a new best for Roundshaw downs) I haven't lined up for anything.

But next Saturday and next Sunday that will change as I attempt my first two day ultra; the Vanguard Way city to sea ultra.  With around 33 miles each day the route winds its way from Croydon to Newhaven on the coast.  Whilst maybe not as prepared as I could be (house decorating got in the way of the planned back to back runs) I feel ready to take it on.  Since the picnic I've done a few 20+ mile runs and lots at the 13-16 mile length- off road and hilly.  Hopefully this will be enough to get me through the weekend.

Two weeks of this training period was spent on holiday in the foot hills of the Pyrenees near the town of Quillan.  Amongst some good hiking, beer drinking and relaxing I managed some really good runs, all with several thousand foot of ascent.  There's nothing quite like sweating your way up a hill followed by a 20 minute descent on winding single track. 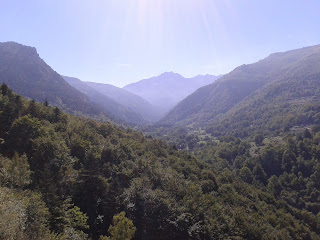