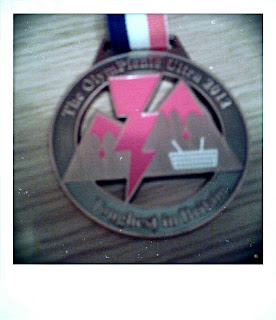 At 2:00 on Saturday the 23rd of June around 150 runners lined up at the bottom of Box Hill, sang "God Save the Queen" before running 30 miles trail (plus a small stretch of road) which included; 7,000 foot of height gain and loss; an ascent of the zig zag road which will be part of the Olympic stage cycling course; 4 trips down and then back up the infamous box hill steps; four descents and ascents of Juniper Bottom; and two climbs up the 'Eiger' steps.

It was a truly epic afternoon and whilst it certainly hurt at times I don't think I have ever enjoyed an event as much of this.

From my previous trips to the Midsummer Munro I knew that pacing would be key.  In fact pacing could be difference between success and a DNF.  With the exception of around 10 runners who formed an early lead group it was a cautious start by most as we headed up the grassy slope of Box Hill before turning round a cone and descending to the start of the zig zag road.  Here the pace quickened- the novelty of freshly laid tarmac under our feet.  I resisted the urge to take this, one of the easier climbs of the day, too fast and reached the top in around 30th place.  At this point the race rejoined the normal route- down the steps, over the bridge, over the stepping stones and then back up.  Runners were still relatively bunched up at this point as we turned at the trig point and headed down the hill ready to ascend the long climb to the road.  I walked most of this climb, crossed the road and in a group of about 4 took the next couple of flat miles at a relatively brisk pace to the grassy slope to Juniper Bottom.  Normally at this point you run half way down, round a cone and back up.  This, an Olympic year saw runners heading all the way to the bottom of the hill before returning to the top.

From that point on the course returned to normal again; the long stony downhill path to the car park before climbing the steps, a short flat section before descending (a some what slippery path) to the turn around.  I forgot to look at my watch so I have no idea what my split was here but I was feeling good, in fact I was feeling amazing!  I decided that maybe I didn't need to be taking it quite so slow and between White Hill and the road crossing passed about 5 guys and a few more up the next hill with two more insight as I headed back towards the next set of hills which passed without too much event; soon enough I was at the trig point ready to tackle the steps again.

The next 4 miles must be the hardest of the race as you do the steps (up and down) twice as well as the main Box Hill slope with hardly any flats to recover.  I hit the 'half way point' (16 miles) in about 2:50 and caught the two runners I'd been chasing before the steps.

At the third visit to the trig point a guy caught me and we ran most of the race together- passing each other at various points of the race.   By now the Midsummer Munro runners were in our midst which provided some welcome support- both in terms of the faster runners cheering us on and with the slower runners providing a target to overtake.

I started to feel my self cramping up a bit as I headed into the third descent to Juniper Bottom, but it wasn't too bad.  It got gradually worse but a quick stretch at White Hill seemed to make it go away.  At the three quarter way turn around I was feeling good, hiked back up and made a quick calculation that if I averted any disasters I could get a finish in around five and half hours.  Sure I was slowing down but I reckoned I still had enough energy to keep up a respectable pace.

The guy who I had been running with off and on since the trig point caught and passed me whilst I was stretching away some cramp at the top of Juniper Bottom, but I kept him in sight whilst noticing 2 guys who were catching us up.  By the time we'd crossed the road, descended the chute and made our way back to the trig point we were a group of four.

This was where I made a decision- death or glory!  In too many races I've lost four or five places in the final miles and today was not going to be one of those days.  With the knowledge that the finish was a only 2 miles (and one set of steps the go down and back up) I sprinted away and threw myself down the stairs as fast as I could.  The plan pretty much worked as only one of the group managed to keep up.  Unfortunately he passed me back up the hill, but the other two runners were well behind now.

All that was left now was the final descent of the day.  The finish sight was a beauty to behold and I sprinted as fast as I could down that hill to cross the line, arms aloft, in 5:32:47 and 11th place.

Without a doubt the Olympicnic is one of the best races I've run and also one of the best races I've run.  For once I managed to get my pacing and hydration down.  I don't think, with maybe the exception of a little bit of cramp, that I was unhappy with any aspect of my running and I don't think I could have done it any faster.  If you had asked me what my aims were before the race I don't think I would have expected to have gone as quick or finished as high as I did.  I am, in short, well chuffed.

The course is amazing- and the repetition in the route in some ways even adds to it.  Yes you repeat many sections but these trails are a delight to run- with a really good mix of grass, mud, flint, woodland and steps.  Further more it means you are in constant contact with other runners- those in front, behind and in the second half the Munro runners as well.  Everyone gives each other encouragement and it gives this race a unique atmosphere which I don't think I have encountered anywhere else.

The organisation by Dr. Rob was fantastic, the marshals brilliant and the finishers medal and T-shirt epic as always.

Today I'm feeling a little sore, steps are a challenge; but maybe not quite as bad as I thought I might be.  I think I might take the rest of the week off however; maybe I deserve a little rest.