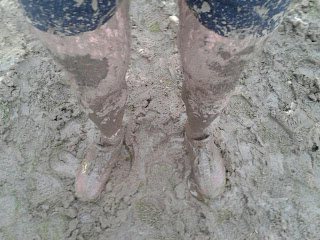 Cross country is great- isn't it?  The mud, the hills, the competition, the elbows, the spikes - the coming together of folk who love to run to slug it out across a muddy field in the depths of winter.

For some reason before I joined a running club I was never that sure about xc- yes I liked running trail and off road races but somehow xc, with its club only status, running spikes and multiple laps seemed just too associated with track athletics.  But I was wrong and it's now a big component of my running year- and the 2012/13 season saw me run in 3 Surrey League matches, the Surrey Championships and the National Championships.  I'm not going to go into detail on how I ran, aside from I ran them all as hard as I could, enjoyed myself and as is the case with the level of cross country competition found myself often in the later half of the field.

The Nationals however need a special mention.  Last year after the amazing experience that was Parliament Hill I knew, wherever it would be the next year, I wanted to run it again.  This resolution was tested when they announced Sunderland would be the 2013 host- but non the less 6 plucky runners from the club agreed to join me up north and with that we had a team.

On paper the Sunderland course is probably quicker than Parliament hill, but on paper you don't have calf deep mud for 95% of the course.  It was a pretty epic experience- definitely the hardest xc match to date- but as much as it hurt there's nothing like pelting it down a hill, through a bog and then out the other side.

Can't wait for the 2013/14 season (but in the mean time there's the small matter of the Cambridge Boundary Marathon next week and the SDW50 in April)
Posted by Simon at 12:14