The Cambridge Boundary Run is a marathon distance tour of the outskirts of the city via road, path, field, and bridge. Whilst flat the (unmarshalled) road crossings, gates and styles combined with the variety of surfaces and small number of water stations mean its not a pb course.  What you do however get for a bargin 10 quid entry is a well marked course, a great (although low key) atmosphere and the chance to take part in an even that's been going for over 50 years.

Going into the race I had mixed expectations. Part of me saw it as a training race for the upcoming SDW50; but at the same time I also wanted to run a marathon at a reasonable effort and get a good time and position.

What I ended up with was probably a mixture of the two. The first half I ran with my friend Tim who was running the half and paced me perfectly to mile 11 at 3:15 marathon pace before he sped up for the finish of his race. I felt good into the second half keeping the pace consistent but around the 18 mile mark things started to slow down and my target finishing time was recalculated in my mind to 3:20 and then 3:30. It didn't get to the point I had to walk or that i wasn't enjoying myself but it was clear I didn't have the miles in my legs to keep up the pace. In the end I finished in 3:32:55 and inside the top 25- I think I can live with that.

I think if I learnt anything from Cambridge it's two things:

First off, however many marathons or ultramarathons you run (I'm up to 9 now), you have to respect the distance- somehow I'm always surprised about how much harder it is to run after 20 miles than it is after 10.

Running is best with mud and hills.   As it happens I've just got back from holiday in the Pennines where in pretty snowy conditions I got to go out on three great runs up and around Cross Fell.  Deep snow meant I never made it to the top of Cross Fell, but got to put in some great miles up and down the trails, across rivers, through bogs and down long snowy descents. 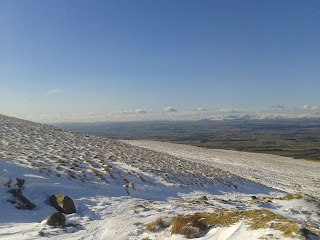 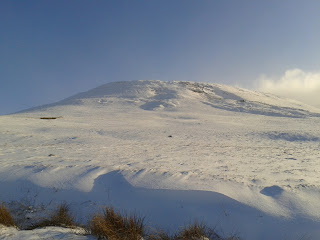 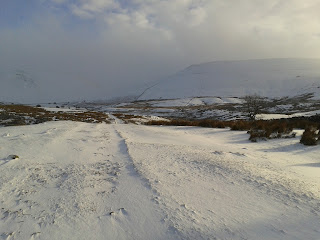