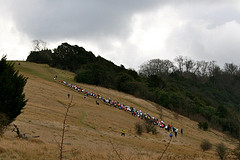 Whilst the Box Hill Fell Race is considered by some to not be a proper fell race (the lack of route choice, the total height of the fell being a mere 224m) it packs a weighty 1,700ft of climbing into its 7.5 miles with steep ascents and descents throughout and at the end of the day whether its trail running or fell running or cross country it doesn't particularly matter; the race is well organised, very hilly, off road so that's all you need to know.

Despite starting and finishing at the same place and passing a few of the same intersections, the route doesn't have too much overlap with the other box hill race- the Midsummer Munro.   The course starts tracking horizontally across the grassy face of Box Hill, round a marshal to take the steepest corner.  From the trig point you then descend steeply over the open grass to hit the trails which then for the rest of the course ascend and descend gullies and woodland tracks.  Some of the hills need a proper effort to move at any speed, at one point I was overtaking people who were running whilst I was walking.  This said, in general it's mostly runnable- to put in context the winners posted sub-7 minute miles on average and mine, a quarter way down the field, were around the 8 and half mark.

Going into the race I wasn't feeling massively confident; training on Tuesday after cross country the week before was hard and a short run on Thursday felt like a real effort for a mere 4 flat miles; but lining up at the start I felt quite good.  The field was strong, and like with cross country league matches it is amazing to see the pace that the front runners take up the hills.  Over the first few miles it was pretty hectic, especially on the first descent from the trig point over open grassland, but the long climb up to Box Hill village started to separate out the field, leaving me at some points running without another runner in sight.  At around the 4 mile point I turned my ankle on a stony descent, started to slow down a bit and was passed by a couple of small groups of runners.  Somehow at around mile 5.5, I think with the arrival at White Hill from which I knew where I was in terms of the course, I got a second wind and managed to draw those runners back into sight and with that motivation then managed to claw back a few places in the final mile.  The finish was at the bottom of the main path down the hill- perfect for an out-of-control-sprint-finish.