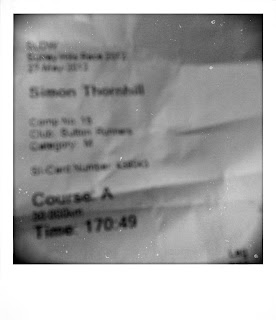 The Surrey Hills Challenge is a 30k (16k and 10k versions also available) self navigating race taking in 12 checkpoints through the surrey hills- high points (both literal and metaphorical) include Leith Hill, Holmbury Hill and Pitch Hill.

Its a cross between orienteering and a normal trail race.  There's a mass start but after that it's your choice what route you take between each of the check points.  When you get to each check point there's a little device you 'dib' your 'dibber' in to which records that you made it there and it what time.  Even better once you've finished and hand your dibber back you get instant results and splits.

The past few weeks have involved training in all kinds of cold and wet weather yet this weekend saw 26 degrees.  At 10:30 as we lined up at the start it was already really hot.  The start was frantic as everyone surged up the first hill and down different paths on the other side.  After checkpoint 2 I settled into a good rhythm up to checkpoint 3, 4 and then 5 to the top of Leith Hill in 43:21 .  Having reccied the route I wasn't too bothered about keeping people in my sights but being a touch competitive when I got caught by two runners at the bottom of Leith Hill I tried to stick with them and managed this as far as the steep ascent to Holmbury Hill where I was told I was in 13th place.  They dropped me but I managed to pass another runner in the process of keeping pace with them.

From there to Pitch Hill and the turn around to start the homeward section of loop I managed to keep up a reasonable effort with a few stops to check the map.  It was however getting really hot and over the next few checkpoints I could feel myself slowing down bit by bit.

For the rest of the course, me and two other runners over took each other and were passed by each other continuously as we individually found some strength or a good route.  Just as I thought I'd never see them again I'd turn a corner and over take one of them and then just as when I thought I'd dropped one of them I'd drop to a walk on a steep hill and get passed again!

The final two checkpoints follow a similar route to the end of both the Leith Hill half and Greensands Marathon in that there's the final bastard of a climb up to the Nower.  It gets no easier over time- those bloody steps at the end of a race are never easy. That out of the way, the final few hundred metres to the finish involved, on the advice of someone I was chatting to before the race, cutting your way down a really steep section of woods.  It was a bit like a scree slope but with foliage rather than rocks.  I managed to just about stay upright; got to the final dibber and recorded my final time of 2:50:49 and a very pleasing 13th place.

Whilst the weather made it really hard work I had a really good time out on the course.  The trails around Leith Hill, as I have said on the Blog at length before, are excellent and the route choice aspect of the race made things even more interesting.  I felt like a put a solid effort all things told even if I was cursing the temperature.  Let's just hope for some cooler weather come June 23rd and Trail Marathon Wales...
Posted by Simon at 11:46