Due to some other commitments I won't be able to travel to Wales next week to run as planned, Trail Marathon Wales.  So I was thinking, what races are there that I can do that are nearer to home (especially as it will be my 30th Birthday).  And then, in a moment of foolish inspiration I remembered- THE PICNIC.  Held on Box Hill this is billed as Britain's hardest marathon, and to make it extra special this year it's going to be a special ultra-marathon edition at 30 miles; the "Olym-picnic".  Due to the last minute change of plans it's been too late to change my training plans so I'm just going to have to hope I've got enough climbing in my legs to make it round.  I predict it's going to be both amazing and awful at the same time...

Over the past few weeks I've managed to get out on some really good runs plus a couple of little races.  Over the Jubilee weekend I was down in Devon and went for some really good runs along the South West Coastal Path- the highlight being a particularly exposed headland near Salcombe.  I ran last weekend Roundshaw Downs park run in slow conditions (massive headwind on the first half of the course), but managed to come in 6th place.  On Tuesday I ran stage 2 of the weeklong Tour of Epsom down in Nonsuch Park where I came in 12th in 23:17 over the 3.7 mile course which was nice- although as I wasn't running the whole week I had an advantage that I didn't need to worry about running the next day.

Ran 10 miles this morning, will probabaly jog round 5 or 6 miles on Wednesday and that'll be it before Saturday and 30 miles, 7,500 ft of height gain and loss...after that I imagine I might have a little rest!

Finally in beer news tried a tasty half of Camden Town Brewerys' Black Ink today.  A tasty stout indeed (even if it's not real ale). 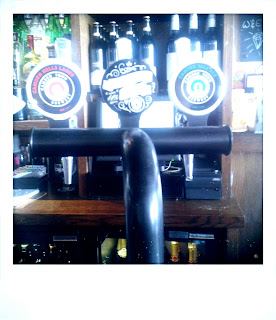