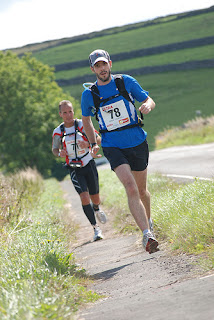 The race set off from Cromford with everyone bunched up along the canal, but as soon as the first hill hit the field was spread out quite far.  I walked up the first hill with a guy who gave me a good tip ("if you can't see the top, walk it!") and we stuck together for the next 26 miles.  The route along the High Peak trail was fantastic, really scenic and whilst there were a few ups, there were enough downs to make the pace back up.

After hitting the first check point (1:25) the route cuts across some fields and then down to the Tissington Trail, which is flat and long.  It was easy to keep up the pace along this section and soon enough check point two came along in just under 3 hours.  I was feeling pretty good, downed a can of Coke, tried a 9 bar (not nice, I think I'll stick to brunch bars in the future!) and set off again.

At the end of the Tissington trail the route goes round the houses (literally) through Ashbourne but soon enough we were back on the trails, at one point running through a field of corn where the path had been cut out, bit like a maze (a maize?).  We hit the marathon distance at just under 4 hours and I was still feeling good and settled into a pace of around 9 min miles, passing a few folk who were walking.

I was amazed to hit checkpoint 3 at 4:30 and apparently in 6th, catching up with some runners who had taken a wrong turn at Shirley.  From checkpoint 3 it was a long slog along the appropriately name 'long lane' which was surprisingly lumpy.  At around mile 34 disaster struck...

There was a road that went off to the right, and on a sign post on the other side of the road there was one of the UltraRace direction arrow stickers.  Due to my middling eyesight I was about to cross the road to see which way it pointed, but the guy behind me shouted out 'right turn here mate'.  I should have checked that arrow, because it must have been pointing straight on.  A mile or so after the wrong turn I was starting to worry as I hadn't seen any markers.  We got to a farm and worked out where we were.  The road we took backtracked away from Derby!  Disaster!  I had printed out a map of this section of the route and worked out how we could complete the square and get back on to route.  This little diversion added on about 2 miles and I reckon with the map reading about half an hour of my time.  Unlike when I was lost at the Croydon Ultra however I wasn't pissed off about it.  I'd worked out where I was and how to get back on to the route and was still on for my aim of sub 7 hours.  I think with Ultras sticking to the route is all part of event.

Back on route we met up with some other runners and I realised how much time I'd lost.  It was getting warm but the route markings were good and I eat (took?) my emergency gel and soon enough we were running through a council estate (quote of the day, a women leaning out of her window shouted "well done runners, you can do this f**king thing!), pass the ring road and then a sprint(ish) finish.  Then I collapsed!  It was a great feeling to finish, and after a bit of a sit and another can of coke I managed to walk to the car.

Whilst the detour was annoying, it was my own fault.  The race organisation was really good, Ultrarace are a smooth operation and I'll definitely do one of their events again.  The route was really good, with the exception of the road section, and the atmosphere was great- the right mix of friendly and competitive.

I was also really please with my running, pacing the first 30 miles in pretty much equal 10 mile splits, and didn't hit 'the wall' (more of a slow gradual reduction in pace!).

So that's that.  My first proper ultra completed.  What's next?  Not too sure.  May do Greensands Marathon in October and make it 3 Trionium races for the year.  I think that's the main plan- use my ultramarathon training and fitness to take on the Surrey hills.  The other option is to drop the distance and see how quick I can do a half?  Who knows.  For now I'm mainly resting and eating!  What ever, I don't think this will be my last Ultra...